Star of A&E's Duck Dynasty, Phil Robertson exposes the ten lies the devil has attempted to use to destroy America's soul and offers ten truths that if acted on would put God back into culture and turn the country around.

In April of 1966, Time magazine raised a ruckus when the cover of the magazine featured in red block-letters a now-infamous question: "Is God Dead?" It marked a turning point for the country, revealing the cultural acceptability of questioning whether God was active and alive in our world. Circumstances have not improved. In his new book,Phil Robertson exposes the 10 essential deceptions and schemes the devil has used in an attempt to steal, kill, and destroy America's soul. With personal narrative and folksy wisdom, Phil shares the ten counter-truths that, if believed and acted on, would put God back into the culture and might just turn our country around. His most prophetic work to date, the new book is deeply rooted in Phil's desire that all might come into the life-giving, peace-filling, wholly-transforming experience of God's great love. 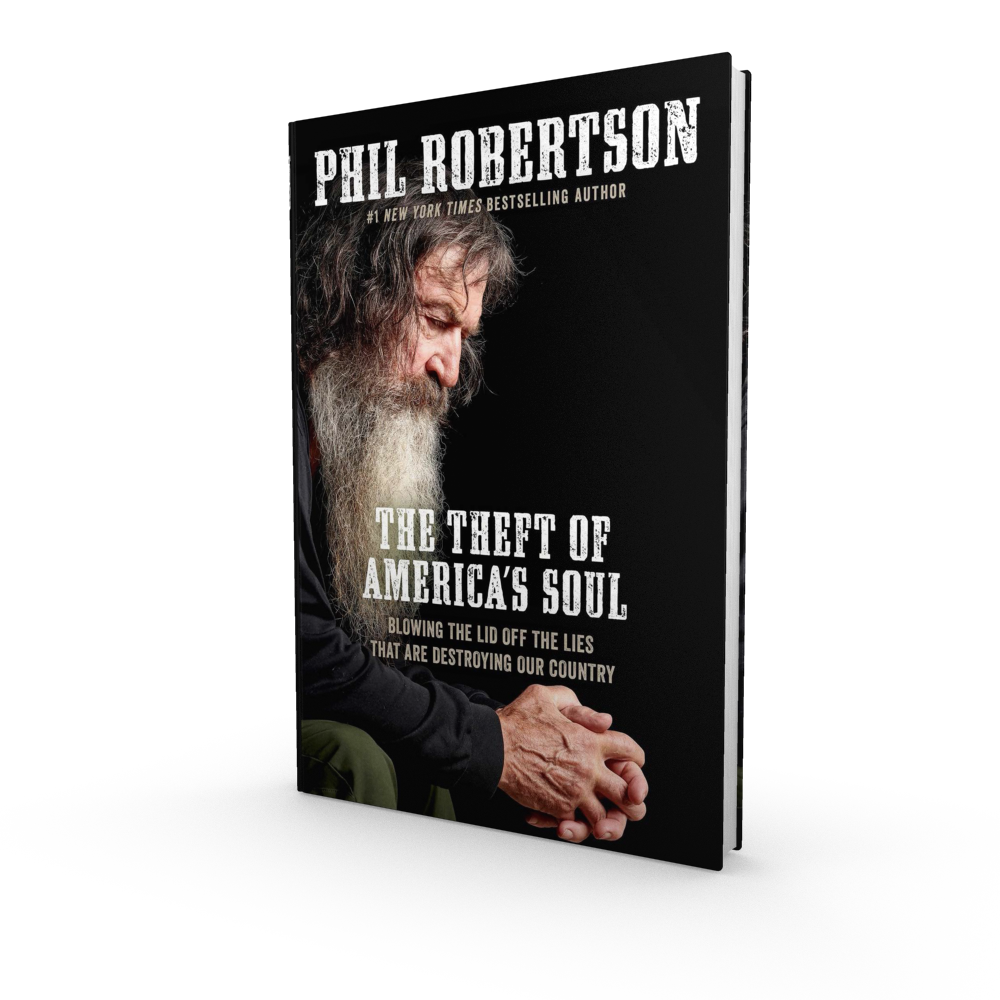 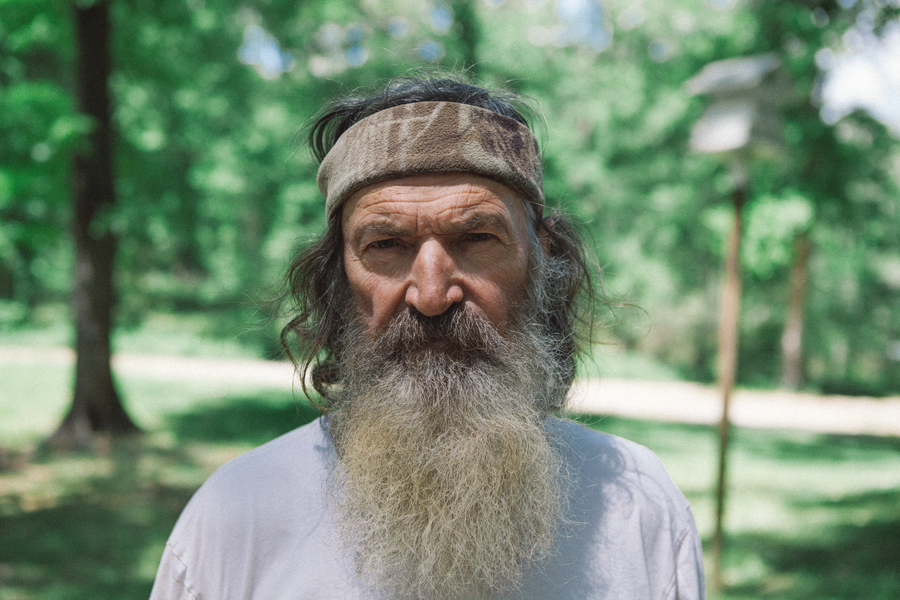 Phil Robertson, the founder and co-owner of the Duck Commander Company, is a professional hunter, successful businessman, and the popular star of A & E’s reality television series Duck Dynasty. He is also the host of the new subscription television series In the Woods with Phil on CRTV.com. He authored two New York Times bestselling books, Happy, Happy, Happy and UnPHILtered. He and his wife, Kay, live in West Monroe, Louisiana. Together, they have four grown sons and daughters-in-law, twenty-one grandchildren, and six great-grandchildren.

Immediate access to the first 3 chapters of the book, access to an audio book preview clip, and an exclusive downloadable family album.

(Disclaimer: You will not receive access to the photo album immediately, it will be emailed to you at a later date)

STEP 1: ORDER A COPY FROM YOUR PREFERRED RETAILER:

STEP 2: USE ORDER INFO TO FILL OUT THE FORM BELOW

By submitting your email address, you understand that you will receive email communications from HarperCollins Christian Publishing (501 Nelson Place, Nashville, TN 37214 USA) providing information about products and services of HCCP and its affiliates, and Phil Robertson. You may unsubscribe from these email communications at any time. If you have any questions, please review our Privacy Policy or email us at [email protected]

STEP 3: CHECK YOUR EMAIL FOR YOUR OFFER! 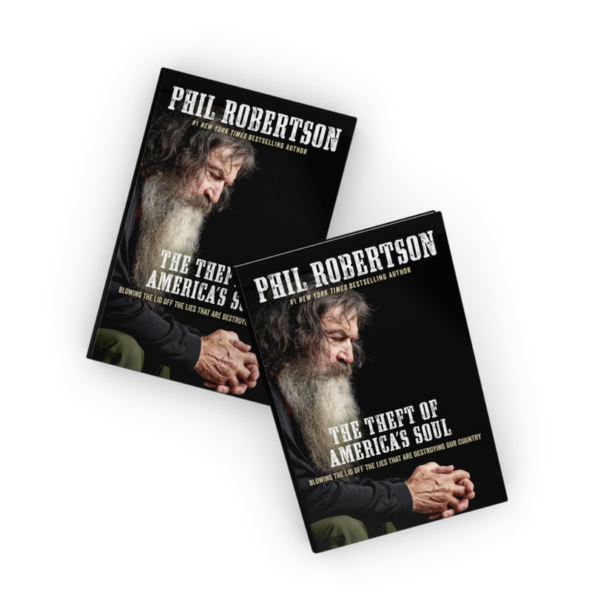 “THE MORAL CLARITY IN THIS BOOK IS SO POWERFUL AND SO REFRESHING I WISH I COULD GIVE IT TO EVERYONE I KNOW. INCIDENTALLY, THE ONLY WAY SOMETHING COULD BE THIS FULL OF TRUTH AND WISDOM IS IF ITS AUTHOR IS A PROPHET. THAT HE IS. HEAR HIM.”

“PHIL ROBERTSON'S VOICE IS UNIQUE IN THAT HE NOT ONLY SPEAKS THE TRUTH, BUT HE HAS BEEN LIVING THESE TRUTHS AS A MATTER OF FAITH AND INTEGRITY FOR MANY YEARS. HIS AUTHENTICITY AND HIS CHALLENGES WILL SPEAK TO YOU.”

“IN THE THEFT OF AMERICA'S SOUL, THE DUCK COMMANDER HAS SET HIS SIGHTS ON SOMETHING HIGHER, TAKING AIM AT THE TEN LIES THAT HAVE LED OUR CULTURE ASTRAY AND PUT OUR FAITH, OUR FAMILIES, AND OUR FREEDOM AT RISK. I AM GRATEFUL FOR THE DIRECT, NONPOLITICALLY CORRECT WAY MY FRIEND PHIL ROBERTSON LAYS OUT THE TRUTH.”

“PHIL IS A MAN WHO DOESN'T BEAT AROUND THE BUSH. HE DOESN'T SUGARCOAT WHAT IS GOING ON IN OUR WORLD TODAY AND ONCE AGAIN SOUNDS THE ALARM AS HE LAYS OUT THE CASE FOR THEFT OF AMERICA'S SOUL.”

“IN THE THEFT OF AMERICA'S SOUL HE CANDIDLY SHARES NEW AND PERSONAL STORIES WHILE POWERFULLY AND COMPELLINGLY PRESENTING SPIRITUAL SOLUTIONS TO OUR CURRENT CULTURE WAR.”